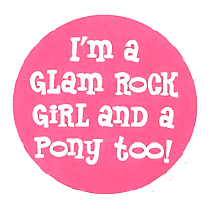 My Little Pony: Friendship Is Magic was probably one of the definitive cartoons of the 2010s, and for both good and bad reasons. Despite being a diet adult (freshly 18) when it aired (if you tell me this was your childhood, I WILL shit myself), it ended up becoming somewhat of a personality-shaping influence on me. Late 2010 to late 2012 was both the most fun, chaotic, and later stressful time of my life. 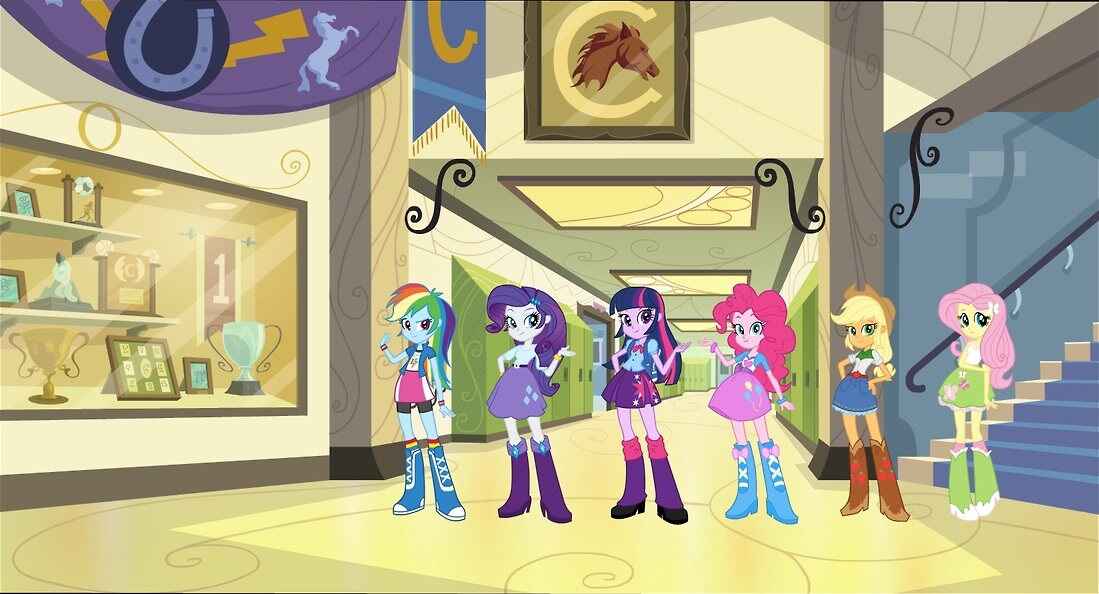 One of my many criticisms of Bronies is a lot of them forgot who the show was really for. Yes, there was backlash when this concept was revealed. No shit, there's going to have a canon high school AU for the sake of humanoid dolls to dress up. Duh. Hasbro wanted to rival Mattel's Monster High. But...this concept art isn't all that great. Not even Lauren Faust liked it much. The trailer is pretty funny, though. Maybe I'll just watch a camrip when it's out...

Twilight becomes an Alicorn and is slowly accepting her title as Princess, only to be derailed by the crown being stolen by Sunset Shimmer, a vindictive former student of Celestia. The thief went through a portal to another world that's only open three days every thirty moons (what the fuck does this mean in humanspeak...? 2½ years, I assume.). Cue Twilight and Spike step through, and are transported to a human high school AU. 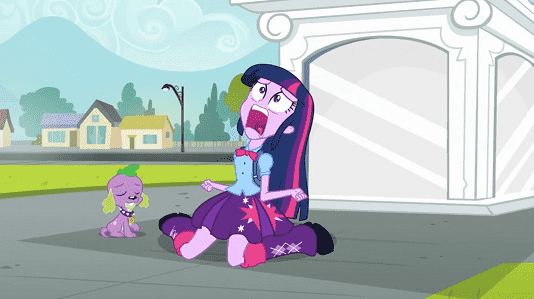 Not pictured: the amount of acne poor Twilight is sprouting left and right. Being a teen sucks!

In order to get the crown back, Twilight has to be elected as Princess of the Fall Formal, which is like...homecoming...? (I dropped out of high school ~14 years ago, how the fuck would I know.) It seems like such a hopeless endeavor since Sunset Shimmer runs the school, but we know deep down that all the cliques are fed up with her, maybe she has a way to convince the whole school...

I actually loved this in a "so bad it's good way" when I first watched it, but also, dare I say it's not bad at all? It's a high school AU...but canon! And it's actually kind of fun, as someone who thinks content like that is fucking stupid! It's nothing to write home about, but it was a weird side-story to the main show. Now that there's a series of its own following it, it's still solid and what I disliked about it were kind of vindicated by later installments.

Twilight navigating human life at the beginning is funny, I laughed almost every time Twilight would slip up into acting like a pony again. So is Sunset Shimmer being a mean girl bully - knowing what happens later, it's whiplash and nice to see her later character development. Twilight becoming friends with human versions of the Mane 6 was also a cute throwback to the first episode. But it turns out the human versions have their own friend drama going on...was Sunset responsible for this? This movie really has it all with the drama and intrigue!

Meghan McCarthy envisioned this movie as a reverse The Wizard of Oz, which fits and is a cute tribute in a way. The songs are average. Human designs are also okay, although some characters look awful (notably Principle Celestia and Luna). Yes, Flash Sentry is as interesting as stale toast, but who cares. It's not like he killed your whole family. Maybe he should have, then he'd be relevant enough for me to have an opinion on him.

Confession: I was seriously expecting that after Sunset turned into a demon, destroyed the school building, and hypnotized her classmates into becoming her minions, only to have the Mane 6 do a magical girl style transformation and own her with the Power of Friendship (kind of anti-climatic...), some Men In Black style memory wipe would happen afterward to the normie classmates. But it didn't. And it's kind of funnier that way. I also personally didn't believe Sunset's redemption was sincere at the time. It was akin to some drama queen Tumblr user faux-apology. 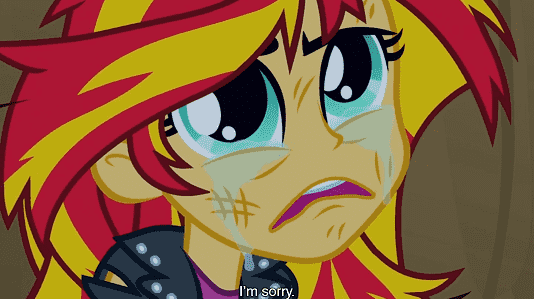 All in all, Equestria Girls was a pretty good start for the series! If only because it led up to... 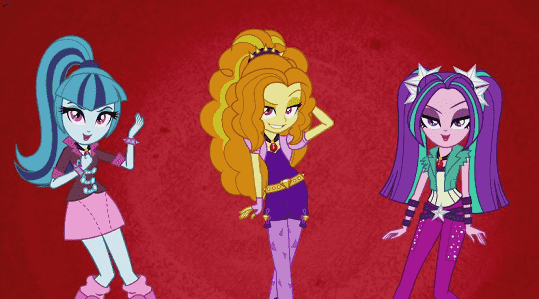 Now that you're under our spell.

The Dazzlings were the star of the show, so it's fitting the movie would open to them trying to harvest magic from...a cheap diner? I can't think of a more torturous punishment than to be sent to a mundane high school AU with no magic...or is there? Time to enroll in Equestria High and start a battle of the bands to harvest that sweet chaotic magic.

I really liked that the school did NOT forgive Sunset Shimmer so quickly and distrusted her. She's gone from being the social ringleader to the black sheep. What she did is still fresh even in her friend's minds, and Principle Luna doesn't believe her claims about the new students being suspicious. Maybe there's a way she can win them back? Either way, they need Twilight's help to stop them.

The Dazzlings are Sirens, and the whole school is under their spell. Except...the Mane 6. Now we really have to win this battle of the bands to save the school, except Twilight doesn't really...know how to play music. Uh oh! In the end it's The Rainbooms the The Dazzlings. But there's still some inner circle turmoil among the Mane 6, mixed in with Sunset's resentment towards Twilight, Trixie sabotaging The Rainbooms being in the finals (to be fair, her song was pretty good)... these teenagers just can't stop being so dramatic.

Rainbow Rocks is the best Equestria Girls movie, if you ask me. Great songs (but of course the villains had the best), good villains, pure fun all around. Equestria Girls was something I laughed and mostly liked ironically, but Rainbow Rocks, well...rocks! There's also a Maud cameo!

In Equestria Girls, human!Pinkie Pie asks if Twilight has a twin. It sounds like Pinkie-brand humor, but it does raise the question: Where is the Equestria Girls version of Twilight, anyway? Enter Sci-Twi (fanon nickname). She goes to the rival school, Crystal Prep, and Sunset Shimmer spots her poking around the portal.

Crystal Prep is the fancy school that basically wins all the competitions, but what Equestria High has that they don't is...character? I guess? I don't really care. Sci-Twi is basically Twilight in the first episode, she's a reclusive nerd that's glued to her schoolwork and doesn't have any friends besides Spike. Maybe she'll...make some at The Friendship Games? Principle Cinch sure wants her to compete, to keep up with the school's image. But wait...why does everyone at Canterlot High seem to already know who Sci-Twi is?

I don't find Friendship Games all that compelling outside of Sci-Twi and some of the Crystal Prep students having cute designs. Sci-Twi befriending the Mane 6 was cute (especially the scene with Fluttershy). Principle Cinch is good love to hate villain with how she borderline blackmails and puts heavy pressure on Sci-Twi, and her song was the only one I actually liked as opposed to just being decent. More teen drama ensues that's resolved by the end. 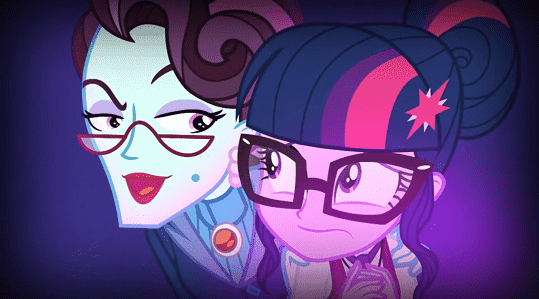 It's not bad, but I'm not a fan. Side note, but Sci-Twi's demon transformation is infinitely cooler than Sunset's, even if her reasoning for it was weaker and it felt borderline out-of-character for her to suddenly have an evil streak when being pushed to her limit, in my opinion.

Sci-Twi (who has now transferred to Canterlot High) has a nightmare about her demon form from the last movie, Midnight Sparkle. What could this mean? Doesn't matter (or does it?), since everyone's going to summer camp.

Flash Sentry feels conflicted over how the Twilight in this world isn't the literal horse he has a teenage crush on, especially when Sci-Twi has a thing going on with Timber. The Friendship Games is Sci-Twi's equivalent to Sunset's Fall Formal and people can't stop making jabs about it. There's an urban legend about the forest spirit, Gaea Everfree, haunting everyone, surely this has no correlation to the powers the Mane 6 can use within camp grounds...right? Also some sub plot with Filthy Rich I don't care about. 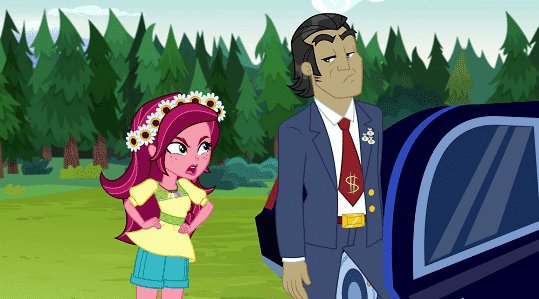 Why does he look even more like a Republican in human form?

Yeah, I... don't know if this is better or worse than Friendship Games for me. It's not all that interesting and was a chore to watch after the beginning. The songs are ok. The new friendship between Sci-Twi and Sunset is cute, at least. It's safe to say the Equestria Girls movies kind of deflated quality-wise after Rainbow Rocks, but there's still more material in this series.

(Will add other media like specials when I re/watch them)