Pikachu feels very pretty and demands you look at him. Mobile users should view this page on desktop mode so he won't get in the way. The Pokemon craze started in 1998, and even back then there were discussions and speculation about relationshipping. According to wiki, there were several camps on a forum in the late 90s, those who believed in Ash and Misty, Ash and Gary, and even Ash and Ritchie, with some defectors wanting Ash or Misty to themselves. Some things never change. Pokemon shipping is it's own DaVinci's Code where combinations you never would've even considered have their own names and at least one fan. (And that site is technically outdated, there's probably 5x more since more games have been released.)

Kids, adults, and weird hybrids of both (kidults) all seem to have opinions about this even today. Bulbapedia claims that shipping has died down and only occurs in small pockets of the fandom, but I think the climate surrounding it changed. Finding old fansites of yore are fascinating because nearly all of them are written by teenagers and younger adults mostly seeing what they want to see. A lot of fansites will have pages for "evidence", which will vary between "they hug/touch each other a lot" or "they're good friends", even "they don't know it yet". There's even some anti-shipping pages, on the flipside.

My thoughts on the theoretical love lives of the ageless tweens (and some adults) in Pokemon is akin to how adults to this very day will not shut up about being forced to read "the classics" in high school - It's not a part of my life, but I sure do have some strong feelings about it. I think the answer on "Who should Ash date?" is pretty clear: Ash has a lot of growing up to do. He's been 10 for 25 years! It's best he waits and doesn't make the same mistake his mother did, he might even be more like his father with how many lost connections and bridges he's burned. Kid has a one-track mind and is dead set on just Pokemon for now.

But what I'm more interested in now is what kind of person subscribes to the answer to this eternal question. Maybe this should be the new MTBI, or a replacement for the Hogwarts sorting houses as a pop culture personality quiz, but I decided to order some potential answers as an alignment. This is just opinion! And you might not like it. I don't even care enough about Dungeons and Dragons to know if I got these alignments right. It's a joke!

I haven't caught up on the anime since Diamond & Pearl and skimming a few Best Wishes episodes I thought were interesting (and even then, if you think I've sat through an entire season with all it's filler, you're insane), so wiki and fansites were consulted for some of these.

Lawful good: May and Dawn 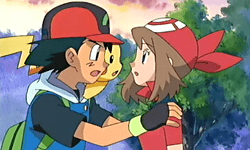 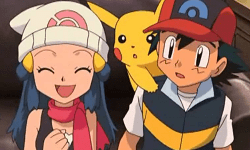 Semi-mainstream but not the first choice.

Admittedly, I think the evidence for these are weak. Ash started on the wrong foot with both Misty, May, and Dawn by literally destroying their bikes, but May and Dawn were more forgiving. Besides that, I just don't see it. If you put a gun to my head to make me choose which female traveling companion to ship with Ash (why would you do that?), I'd say Dawn, just to be contrarian (makes more sense than Dawn and Paul - yuck!). May is an inoffensive choice too, but there's too many AMVs about May and Drew to that one Taylor Swift song to know it's just not meant to be.

Also Lawful Good: Chloe from the newer seasons might qualify, although I have no idea who she is. Lana, too, although I don't know what her characterization in the anime is like besides her and Ash are friends and the prospect is teased in-canon. 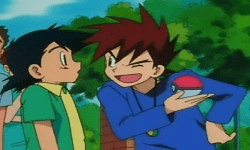 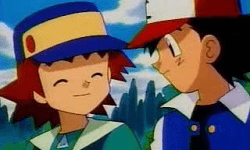 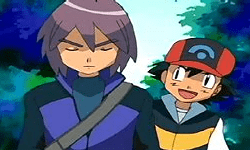 Sticking to your principles regardless of what others say.

I simply can't see Ash and Gary, personally, even when Gary softened and became a bit nicer later seasons. I don't subscribe to the theory that Oak is Ash's father (I can't deny the possibility but I'd prefer not to imagine Oak being an old goat with one of his students), so Ash theoretically being Gary's uncle isn't a factor. I just don't like it! Even if I respect the old-school fan's dedication. It's also like an off-brand version of their game counterparts, which I never cared for either (even if they're clearly on their honeymoon in Sun and Moon).

Back in the day, I thought Paul was compelling in a slash goggles lens. Paul was basically the anime's Silver and goes through a similar development. He starts off as Ash's worst rival, very rude and abusive to his Pokemon, until after getting knocked down a peg by Frontier Brain Brandon. Despite his initial cruelty, Ash consistently engaged with him on friendly terms, and they took strategy cues from each other. Dare I say...I'm a fan?

Also Neutral Good: I actually had Goh here when I first wrote this, but I removed it since I have no idea who he is, but there's a lot of conspiracy fuel for it. Trip from Best Wishes would be here if I knew anything about him. Seems like an off-brand Paul combined with Todd. Boo! 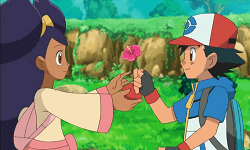 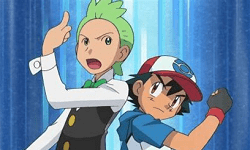 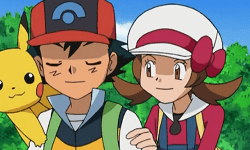 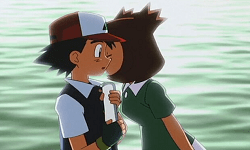 Quirky, but plausible. Not the first thought someone would have but you could make a good argument for it.

I only watched some of Best Wishes for Georgia and Burgundy. I uh...don't really know enough about half of these to have a judgment! Ash and Iris apparently has enough backing to have its share of truthers. Cilan, too. Lyra was, creepily enough (in hindsight), a shipping bicycle back when HGSS was out. She was shipped with basically everyone, and so is Ash. Did I ship this to be contrarian back in the day...? Probably. They got along well. Both Ash and gameverse Lyra are like tofu: It tastes like absolute shit by itself, but is pretty flexible when cooked with other food. That's probably why the protagonists in general are a launcher of a thousand ships, they're more of a vehicle of growth for a more interesting character.

Yes, I put Latias here. She had a human form! It's fine! And this is arguably more canon than anything else... I'm pretty sure I've seen edits where Latias was replaced with Misty. Cope and seethe. Latias was here, Misty is a loser.

Also Chaotic Good: Todd, since the main evidence is that he sacrificed his camera to save Ash, despite asserting episodes earlier he cares more about taking photos than Pikachu. Uh...yeah. Kinda weak. But it's more compelling than a broken bike.

True Neutral: a CotD or side character 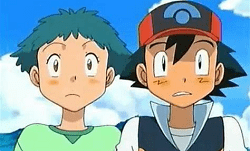 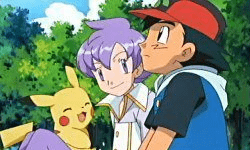 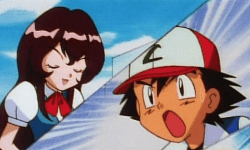 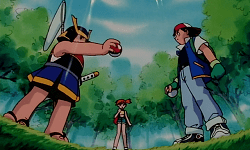 Defectors of the shipping war. Just in it's own corner away from everyone.

CotD standards for Character of the Day, a shorthand for those millions of friends that Ash meets up with in an episode (or few) but never sees again. I'm not listing all of them. There's too many. Remember when I mentioned Ash having a lot of lost connections and burned bridges? Hopefully he'll stop that as an adult and (theoretically) enters the dating game. Nobody likes a ghoster.

I was always in the camp of Angie from Diamond and Pearl being a good match. If they ever...met again...outside that one arc... Anabel was another tomboy who took a one-sided liking to Ash, too. Other interesting honorable mentions I see are Giselle from the original season (the backing is she's the only character Ash has shown attraction to). Maybe the samurai guy from one of the early episodes was a missing connection. Or not...

Also Chaotic Neutral: I always had respect for the small minority who chose Ash and Drew when it came to the Ash and May VS May and Drew war. Ash and Kenny, too, but Kenny is a dork who should die alone. I said it! Melody from the second movie also kisses Ash, similar to Latias, but she's pretty forgettable otherwise. 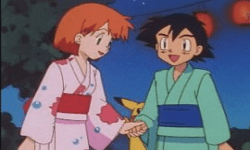 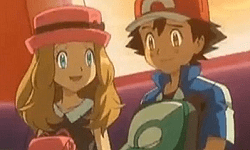 Sticking to the rules and not rocking the boat.

I initially had this as Lawful Good, but honestly, if you want to be a stickler for canon (boring!), no slash, and have a major character involved, here's this. Misty has decades of nostalgia and all the added in shit by 4Kids (Misty's Song is NOT canon! That isn't even her VA!), even if as adults most of us know Ash and Misty will never be endgame (she's moved on), it's still one of the most iconic fan pairings out of anything. 50/50 chance is that you, the reader, probably shipped them a little as a kid. Hey, tastes change and refine. And if not, then congrats on having a galaxy brain since day one! (I didn't.)

I've never watched XY, what I know from wiki and the blogs I read when it was airing, Serena canonically has a crush on Ash and they were childhood friends (since fucking when? I can't keep up with this!). Peak normie option. Shipping equivalent of buttered toast. You can't go wrong, but you can't go right either. Don't you get bored of that?

Also Lawful Neutral: I know nothing about the Sun and Moon anime but according to wiki, Lillie is similar pairing to Serena because she and Ash went to school together. (again...since fucking when?) 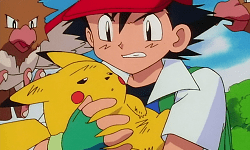 You're really trying to rock the boat in this ship war.

You really shouldn't have gone there! I really didn't want to go here, but it was on the list of Ash pairings and there's...fanart (SFW, you nasties)... And...compilated...backing... Speaking of elephants in the room, humans marrying Pokemon is canon. I'm sure there's a civil rights movement about it in-universe. Some of them can talk, after all. But when it comes to involving Ashy-boy in it and suggesting his own Pikachu is the one for him all along, you look just as weird as the sweaty guy you might've bumped into at a convention carrying a Gardevoir body pillow. Or maybe you ARE that guy.

Hey, shipping doesn't have to be romantic. Even if the context implies that 99.9% of the time. You wouldn't assume a shipper of Ash and Misty or Gary is a creep, right? Maybe if Ash wasn't 10 and Pikachu wasn't...well, Pikachu, the first episode alone would be a love story for the ages. At least Latias had a human form. But wait...Ash turns into a Pikachu in one episode. What if he was stuck that way? Or Pikachu turned into a human? We don't have to jump to the worst possible conclusion. You're still weirder than this crowd of people invested in which eternal tweens should get together, though.

Also Chaotic Neutral: Ash's Bayleef canonically has a crush on him, similar to Latias. Keep her away from Ashachu. 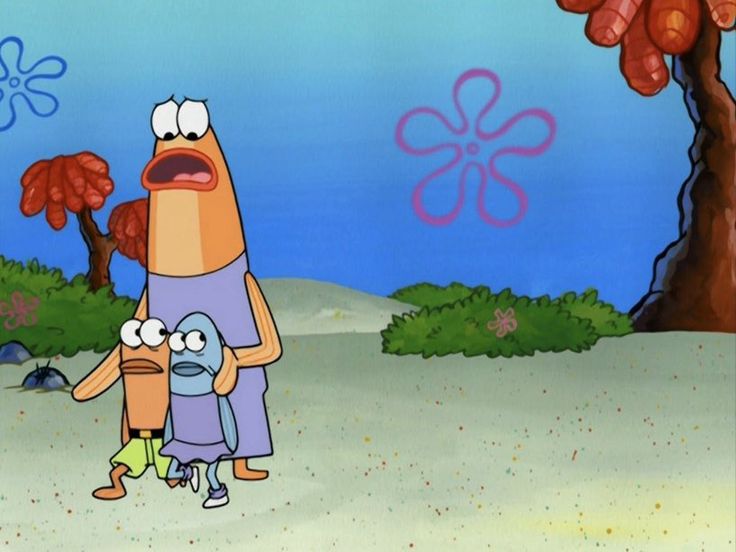 Nope. Not going there. We're not going to do a profile on the subset of people who enjoy the image of Ash as harem master with a girl (or two) on each arm, or Ash with adults, or anyone else like that. I may have grown up in this sphere but writing this page alone made me feel like a creepy teacher that's cheering on the high schoolers macking at homecoming a little too enthusastically. (Make room for Arceus, kids!)

I actually had these organized in which Evil alignment and decided against it. Ash has almost 500 named shippings involving him. There are some ungodly horrors by people whose brains I'd like to inspect in a jar. Listing Pikachu might've been too far for some but I only did it because it pales in comparison. Maybe it's trolling. Maybe it's serious. Who knows! But I don't want to think about it. I don't want anime Chris Hansen knocking on my door just for joking about it.

Check out the sequel page to this, if you haven't already.